Chevron Corp (CVX) is one of the largest oil & gas companies in the world. The company has a market cap of $160B and is an energy behemoth that operates in upstream and downstream businesses.

Last week, the company reported quarterly earnings of -$0.31 on a revenue of $29.25B, which is down 36.6% YoY. Its the first quarter that Chevron had such a huge loss in the past 13 years. While investors were expecting a bad quarter (and a bad year) from Chevron, it was still better than expected as the revenue beat the expectations. The company also announced a quarterly dividend of $1.07, which is what it has paid since Q2 2014.

The media lit up with news from Oppenheimer analyst Fadel Gheitpredicting a dividend cut from Chevron in the coming quarters as he predicts that the company is on an unsustainable path of borrowing funds to pay the dividends.

Before we take a look at whether the dividends are sustainable, I want to highlight the segmented view of the company. As seen from the summary below, Chevron is bleeding money in the upstream segment. It is a sign of the times. Most major oil producers and upstream operators are hurting currently and Chevron is in the same boat. A segment that generated profits of $16.8B in 2014 (when the oil correction had already started) is now losing approx $2B for the year 2015.

The Future of Chevron

As things stand, if the oil prices remain low, Chevron will continue to suffer. Whether oil prices will go up or stay low is anybody’s guess. There are complex issues at play, which are extremely hard to predict and is simply not a question of supply & demand (although that’s a big part of it). There is also the question of geopolitics, social unrest, potential of wars, currency markets etc.

The strong US$ is probably the biggest factor weighing on the commodity prices currently – and there is no sign of letdown. The US$ is on a bull run and history has shown that the cycle usually lasts 7-8 years and we are only halfway through this cycle. So, oil prices can be expected to stay low for the next couple of years, if not longer.

So, what is Chevron to do? It’s a company that relies heavily on the upstream business segment and wants higher oil prices. The longer the oil prices stay low, the more imperative it becomes that Chevron start shifting focus to the downstream segment. While the downstream segment saw some increased profits, Chevron seems more focused on selling those high margin assets with CEO John Watson saying “We continued to reshape the downstream portfolio with well-timed asset sales and good progress on petrochemical investments.” He also went on to say that the company advanced major upstream projects in 2015 including two deepwater projects in Africa, Jack/St. Malo in deepwater Gulf of Mexico, shale and tight resources in Permian Basin, and Gorgon Project in Australia.

Looking at the capex details, Chevron did spend more on the US downstream segment in 2015 and cutback on the US & International upstream segments. But the moves have been minimal – which possibly suggests that Chevron is simply waiting to sit this storm out – hoping for the oil prices to go back up. Something that investors should stay wary of.

Chevron currently holds $11B in cash and cash equivalents. The company has sold some of its assets in 2015 which brought in $6B, and more sales are planned in 2016 and 2017. Last year, the CEO indicated that the company intends to sell $15B worth of assets between 2015 and 2017. So, possibly $9B more of sales coming soon? 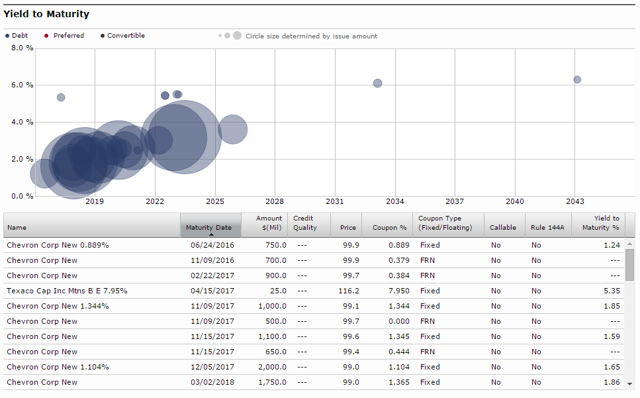 Chevron just had a terrible year in 2015. The company reported an annual revenue of $129B and profits totaling $4.5B. 2016 is expected to be no different as the oil market remains under pressure. The market is tough for upstream operators and a majority of Chevron’s operations remain in the upstream market. Analysts are suggesting that the debt loading to support the dividend payout is not sustainable and will eventually lead to a dividend cut. While true, no time horizon is provided by the said analysts. Since long term projections are very tricky with any market, let alone the oil market, a focus on 2016 shows that between the current cash on hand ($11B), asset sales ($9B?), earnings in 2016 ($3.4B estimated), and the debt repayment ($1.45B) – the current dividend payout amount ($8B) is safe. At least for this year. But time will start running out for Chevron the longer oil prices remain depressed.

30 thoughts on “Is Chevron Dividend Safe?”